An intervention is cost-effective when the cost is worth the value of the impact. In order to assess this, we undertake an in-depth analysis of our own program costs and consider the estimated benefits of deworming on the populations treated by programs we support. We are not able to directly measure the benefits of deworming in the populations treated by the programs we support, as this would require a counterfactual, or a “control” group that is not possible in an at-scale program that aims to treat all at-risk children. Instead, we rely on rigorous external studies that have measured the impact of deworming. Putting these two parts of the equation –  costs and benefits – together, we can estimate the value for money of our program.

Program costs are an important first input to the broader understanding of cost-effectiveness. Annually, we calculate what it costs to deworm a child in each geography where Evidence Action works using our own financial data in combination with government and partner cost estimates, including the estimated value of donated drugs and amortized costs of surveys to assess worm burden. In 2017, we found that the average cost per child per treatment across all geographies was $0.07. Below are the results by geography: 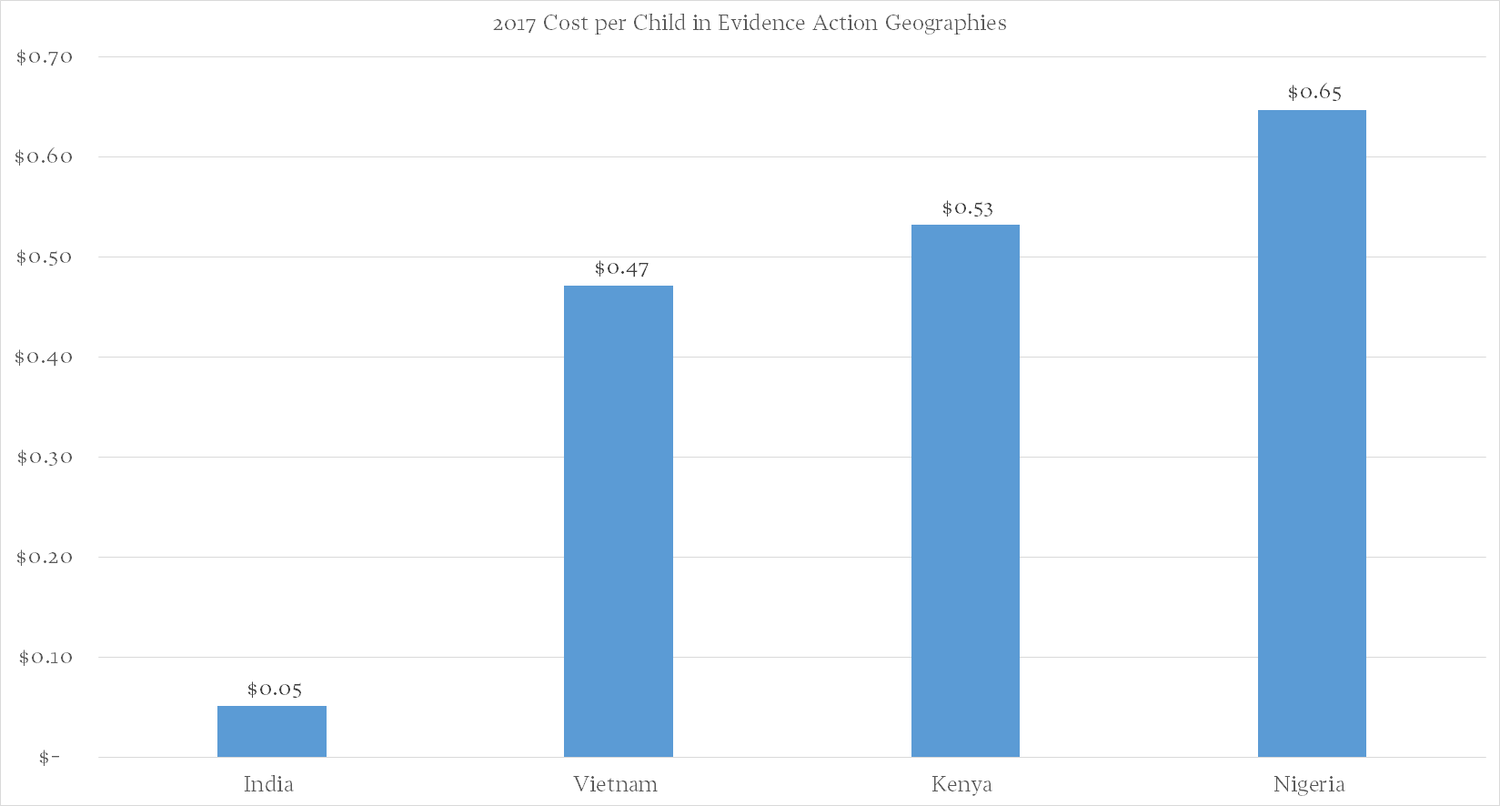 To see what we include in our cost per child analyses, read our previous blog posts here and here. Costs differ by geography due to a variety of reasons including the scale of the program, treatment strategies, costs of doing business, implementation partnership relationships, and the amount of time the program has been running.

Our costs across India are extremely low, largely due to the extensive program coverage and high population treatment targets. In Nigeria, we experience higher costs of implementation, a smaller treatment population, and in one location we operate with another partner in-country which incurs additional costs. We continue to scrutinize costs in Nigeria to pinpoint any areas of inefficiency and reassess the value of our technical assistance in each state where we operate. Costs in Kenya and Vietnam have fluctuated around the $0.50 mark within the past few years and have mostly stabilized.

Generally, we aim to maintain a benchmark of under $0.50 per child per treatment round. These low cost achievements across the majority of Evidence Action geographies continue to show the high efficiency of the deworming programs we support governments to implement.

As for the second part of the ‘equation’: the effectiveness of deworming – this is a much more complicated area of discussion, but one that various researchers have published on extensively, both in terms of short-term benefits and long-term impacts.

Beginning with the most obvious, health is extremely valuable for productivity and quality of life, requiring early investment in order to optimize the amount of healthy time we can devote to activities later in life. Grossman, a renowned health economist, wrote a seminal paper in 1972 demonstrating how health depreciates with age, but can be increased by investing in health early-on [1]. This theory applies directly to deworming – an important early child health investment that contributes to future health later in life.

We often hear about the negative direct health effects that worm infections have on school-age children, causing them extreme discomfort, anemia, and undernutrition — but is deworming only impactful to the extent that it benefits children’s immediate health status?

The answer is no. Deworming provides benefits far beyond direct health impacts. Ill-health in children causes long-term consequences for adult productivity later in life. If a child is stunted or anemic as a child, that can have an impact on productivity either directly through physical disadvantages in the workforce, or indirectly through reduced educational achievement [2]. Lower educational achievement leads to lower wage earnings in adulthood.

We provide a visual representation of the potential short and long-term impacts of worm infection below. There are quite possibly multiple mechanisms by which deworming treatment leads to long-term economic advantages. One plausible explanation is that since children who are dewormed are more likely to be present and attentive in school, they are more likely to have higher educational attainment overall, thus earning more in the future. Another explanation is that children who are dewormed have a lower risk of any cognitive loss that may occur as a result of anemia or stunting. Greater cognitive development can lead to increased school achievements, higher productivity, and therefore higher earnings. Although we’re confident a linkage exists between deworming and productivity/income, we know less about the exact processes through which productivity is affected as a result of decreased cognitive function, as denoted by the dotted lines. 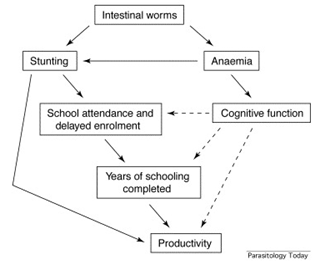 Miguel & Kremer [3] published a study in 2004 showing evidence of some of these effects; in particular, findings that show a 25% reduction in absenteeism after children were dewormed in Kenya. Feeling less fatigue and an increased ability to focus at school, children are able to be more present and attentive in the classroom.

The evidence shows that deworming’s education benefits don’t stop at improvements in school attendance rates. Miguel & Kremer also found that deworming increased girls’ rate of passing the primary school exit exam and entering secondary school by 9.5 percentage points, demonstrating improved school performance and achievement [3]. In line with the linkages in the diagram above, there is a great deal of education literature that demonstrates how additional years of education lead to higher income in the future [4,5,6]. More schooling allows students to gain skills that trigger greater labor productivity and earnings. In fact, returns to schooling have been shown to be highest at the primary level, a key target population for school-based deworming programs [4]. Beyond school achievement, other supporting studies demonstrate cognitive gains as a result of deworming [7]. Worm infection and anemia can dampen cognitive development and human productivity, thus acting as an impediment to individual and societal economic growth.

We can see from this evidence the multiple pathways through which deworming treatment can lead to long-term productivity and income gains. In fact, we have evidence of these income gains in long-term follow-up studies. A study that followed those who were dewormed as children into adulthood found that they had higher wages compared to those who were not dewormed. Men who were dewormed as boys worked 17% more hours each week and missed one fewer meal per week, demonstrating the long-term economic benefits of receiving deworming treatment [8].

Despite the convincing evidence of effect, it is very difficult to quantify and isolate the causation of additional wage-earning capacity for individuals. That is why we have few studies demonstrating these impacts over the long-term. Researchers are continuing to work on this, however, and we’re expecting new studies out soon that will help quantify longer-term effects of deworming in terms of income gained.

Moving forward, we plan further analysis of the above mentioned studies on the long-term benefits of deworming to assess and estimate how these findings might change when applied to our current treatment populations. There are many epidemiologic factors to consider when adapting study findings to a different population, such as differences in worm prevalence and in the proportion and mix of worm species within a certain environment. As we continue to further define and improve our models for the cost-effectiveness of our programs, we will seek expert inputs on our methodologies, incorporate the latest rigorous research, and continue to share the results of these analyses.

Combining these elements of program costs and benefits to gain a relative sense of the “return” for the money invested is a central part of our model here at Evidence Action. For an average of less than $0.50 per child per deworming treatment, governments – along with Deworm the World – are having real impact on at-risk populations. As seen from previous, rigorously conducted studies, providing deworming treatment has significant benefits on child health, education, and income. At Evidence Action, we view deworming as a critical global development intervention because its multiplicative benefits crucial for well-being are incredibly low cost. This combination brings significant value for money to our constituents, whether governments, donors, or other partners, and, most importantly, results in measurable improvements in the lives of children reached by our programs.

[4] Montenegro, C. & Patrinos, H. (2014). Comparable Estimates of Returns to Schooling Around the World. The World Bank and Department of Economics, University of Chile.