Update: Evidence Action is terminating the No Lean Season program. We share more about this decision in this blog post.

Update: Evidence Action is terminating the No Lean Season program, which was designed to increase household food consumption and income by providing travel subsidies for seasonal migration by poor rural laborers in Bangladesh. In this blog post, we share the rationale behind this decision.

What is No Lean Season?

No Lean Season reduces the negative effects of seasonality on the poorest in rural agricultural areas by enabling labor mobility that increases incomes.  It is a new program that we are testing in Evidence Action Beta’s portfolio, based on rigorous experimental evidence.

We give a travel subsidy of $20 to very poor rural laborers so they can send a family member to a nearby city to find a job during the period between planting and harvesting. This is the time in rural areas when there are no jobs, no income, and when families miss meals. This seasonal poverty affects 600 million people around the world.

With a temporary job during this ‘lean season,’ households are are able to put an additional meal on the table for every member of the family each and every day. That’s 500 additional meals during the lean season.

Seasonal Poverty: The Biggest Development Problem You Have Never Heard Of

Seasonality and seasonal income insecurity is a feature of poverty in many parts of the world.

In agricultural regions of developing countries, it’s known as the lean season — that dangerous period between planting and harvesting when job opportunities are scarce and incomes plummet.

Seasonal hunger and deprivation are perhaps the biggest obstacles to the reduction of global poverty, yet they’ve remained largely under the radar. But it is estimated that seasonal hunger affects somewhere between 300 million to 1 billion of the world’s rural poor. Our research shows that a credible number is around 600 poor million people are affected every year by seasonal hunger.

Some rural poor families cope with the hardships of the lean season by sending family members to other areas of their countries with better employment prospects. In rice-growing regions of northern Bangladesh, for example, a third of poor households send seasonal migrants to urban or peri-urban destinations to find temporary jobs that include rickshaw-pulling, construction and potato-farming.

Nonetheless, seasonal migration as a coping strategy is less frequent than might be expected, even though it often benefits poor rural families. That’s because poverty itself limits the ability of very poor people to afford temporary migration. And a migrant’s inability to find work after the family is stretched to the limit to pay for the move can have devastating consequences for households already living close to subsistence. 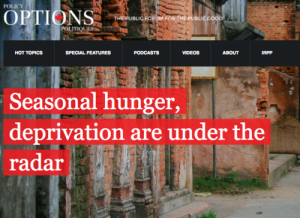 Article about No Lean Season in ‘Policy Options,’ a journal about effective public policies.

The Solution: No Lean Season

No Lean Season addresses seasonal poverty by offering a migration subsidy of about $20 to participating households, covering the cost of a round-trip bus fare to nearby urban areas that do not experience the same seasonal fluctuations in job opportunities. 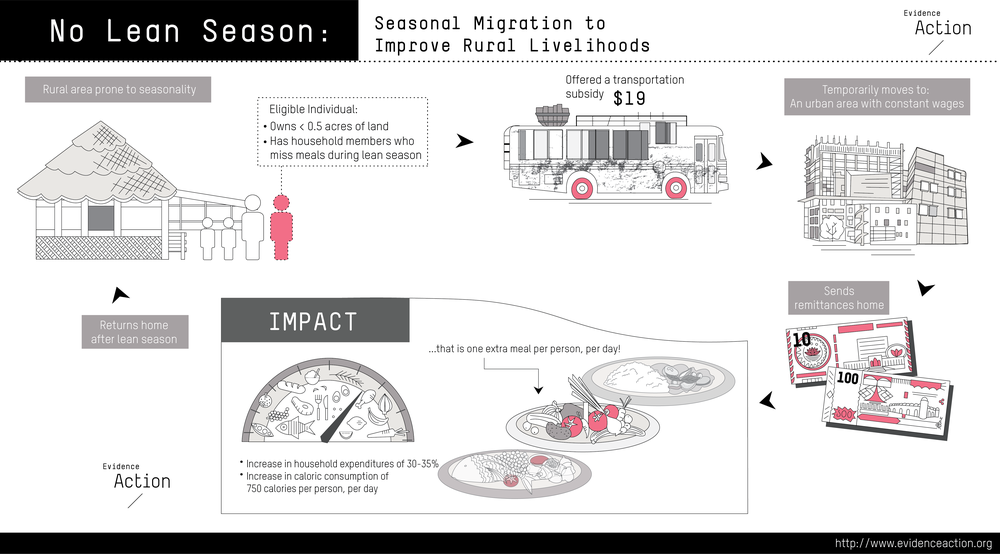 Many people from poor rural areas migrate to urban areas for work to cope with seasonal deprivation. In Bangladesh, however, researchers observed that many vulnerable households, who could potentially reap large benefits from temporary migration, didn’t send anyone away to work, thereby risking hunger. Why weren’t more people migrating? Would these households improve their food security if they were to send a migrant to these areas during the lean season?

A research team from Yale University, the London School of Economics, the University of Sydney, and Innovations for Poverty Action tested between 2008-2011 whether providing information or small financial incentives, worth about the cost of a bus ticket, increased migration and in turn, improved household welfare.

They found that households offered either a grant or loan to migrate were substantially more likely to send someone to work outside the village during the lean season, and those families increased caloric intake relative to those not offered the incentives. Many of those households chose to re-migrate on their own a year later.

A replication and expansion of the study in 2014-2016 not only confirmed these findings, it also showed that larger scale emigration increases wages and work hours in the village of origin, indirectly benefiting other residents who stay back.

THE RESEARCH IN MORE DETAIL

In 2008-2011, the research team measured the impact of information, small loans, and small cash grants on migration, food security and income. Researchers randomly assigned 100 villages (1900 households) to one of four groups:

EFFECTS OF PROGRAM ON MIGRATION RATES

In subsequent years, researchers found a persistently higher re-migration rate among those offered the grant or loan incentive, even absent any further subsidies.

This higher migration rate among incentivized households reveals a barrier preventing poor rural households from taking advantage of seasonal migration– along with a tool for overcoming it. Notably, there is no effect in the information group, which indicates that the reluctance to migrate does not rest on the poor being misinformed about the average profitability of migrating.

The seasonal migration induced by this program was highly profitable on average, producing increases of 30-35 percent in food and non-food expenditures, and 550-700 more calories consumed per person per day, relative to the comparison group (2008, 2009 data).

This is equivalent to an extra meal per person during a period when meals are regularly skipped among the poor.

In 2014, the research team conducted a second randomized evaluation in partnership with Evidence Action. With an interest in delivery at scale, researchers designed an evaluation that not only re-examined the direct benefits of the approach, using new methods and outcome measures, but also explored the indirect spillover effects accruing to non-beneficiaries.

During the 2014 lean season, researchers randomly assigned 133 villages to either a comparison group (38 villages), a “low-intensity” treatment in which 10 percent of the landless population were offered a 1000 taka loan to migrate (48 villages), or a “high-intensity” treatment (47 villages) where 50 percent of the landless population was offered the same loan.

Household income increased by an average of 19 percent during the lean season for households offered a loan in high-intensity villages, and poor households in the same village not offered loans indirectly benefited, experiencing a 10 percent increase in income. 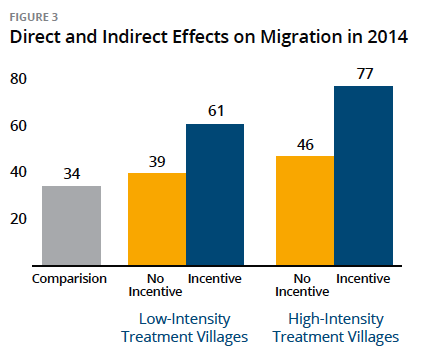 Households not offered the incentives benefited in two ways. Not only were they more likely to migrate as their neighbors migrated, but those who chose not to migrate also gained from the intervention as they faced fewer competitors for the scarce jobs available locally. Through the incentives, researchers induced an additional 30 percent of households to send a migrant from high-intensity villages. This led to an increase in available work hours for non-migrants resident in those villages, along with an 8-9% increase in the agricultural wage rate at home.

In 2017, working with our program and research partners, we delivered and rigorously tested No Lean Season “at scale” for the first time. The results were disappointing – the RCT-at-scale showed no effect on migration and therefore no effect on household consumption and income. We believe these results may have been caused by implementation issues that we have substantially resolved. We have adjusted the program design and are currently conducting a second RCT-at-scale, the results of which will begin to emerge in early 2019 and will be critical to informing the future of the program. We explain these results in depth here.