India faces the highest burden of soil-transmitted helminths (STH) globally, with almost 226 million children at risk of parasitic worm infections. The implications for those affected are severe, with long-term impacts on nutrition levels, economic potential and overall quality of life. India’s National Deworming Day (NDD), initiated in 2015, is the world’s largest single-day public health intervention, providing children between the ages of 1-19 with free deworming tablets. Most treatments are delivered by teachers in schools and anganwadi workers at anganwadi centers (preschools), where out-of-school children are also welcomed and encouraged to come for treatment. Since STH infections are especially common in poorer populations that lack basic services, such as safe water and sanitation, governments implement strategies to include high-need but hard-to-reach groups such as out-of-school children.

As part of Evidence Action’s technical assistance to the Government of India and select state governments for the August NDD treatment round, we are collaborating on several tailored strategies to target hard-to-reach children, including migrant workers in the north-eastern state of Tripura.

Brick kilns in India employ sizeable populations of men, women and children, the majority of whom migrate from other states. The seasonality of the occupation means families regularly move across borders in search of labor, which significantly impacts their consistent access to health services.

Tripura’s pioneering efforts to conduct deworming at brick kilns began in February 2017, in response to the presence of child laborers and out-of school children whose parents work at the kilns. The strategy centered around community-level mapping of kilns and ensuring that frontline health workers who manage local primary health sub-centers in each region, such as auxiliary nurse midwives and multi-purpose workers, communicate closely with kiln managers to set up temporary treatment booths at these locations. At these booths, multi-purpose workers  explained the benefits of deworming before administering the drugs to the children. The booths displayed sensitization materials to inform children, families, and workers about NDD and the benefits of deworming as well as messages supporting good health and hygiene practices.

In the January 2018 treatment round, the government of Tripura reported deworming 1.09 million (10.99 lakh) children. Across the two rounds, there was also an increase in out-of-school children reached, with 35,000 more treated in January 2018 compared to August 2017. This was partly due to the state’s concerted outreach efforts to migrant communities near brick kiln sites, where they targeted 7,400 children and ultimately treated about 6,500 (or nearly 88% of the target). Following on this initial success, the same strategy to reach migrant populations at brick kilns will continue in the August 2018 NDD round. 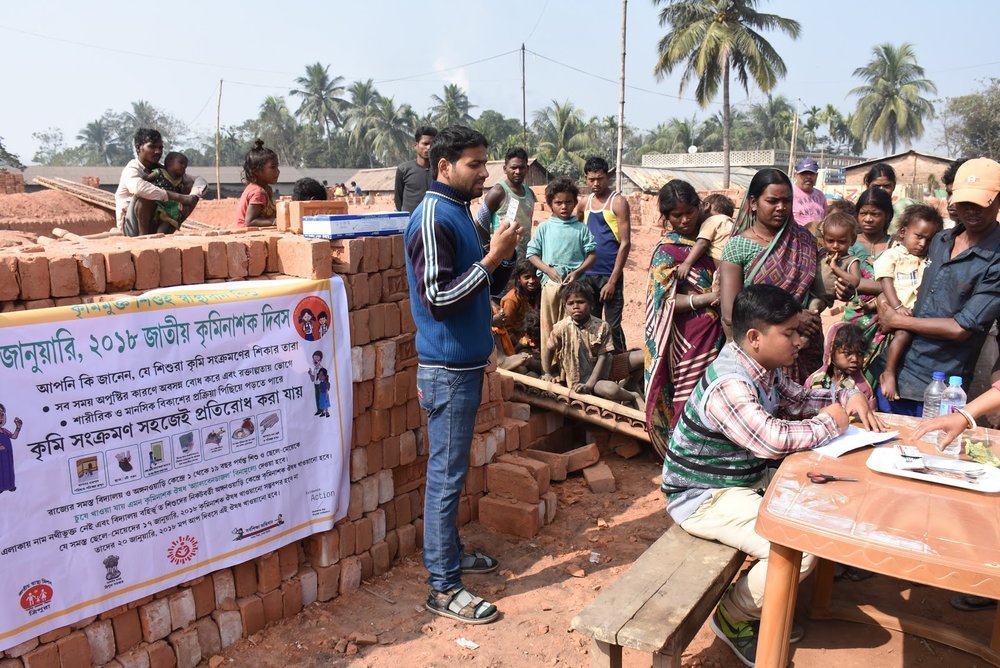 Photo 1: A multi-purpose worker explains the benefits of deworming to the community, at a deworming booth at the brick kiln site in Jirania, West Tripura

Stories from the Brick Kilns

Guddi, a 25 year old mother of three from Jharkhand state, is a migrant laborer working at a brick kiln in Tripura. She is not conversant in the local language, lacks a formal education, and her daughters do not attend school regularly. Life at the kiln is physically demanding and low-paying; this has limited her health-seeking behaviors for herself and her family. Prior to NDD, Guddi had no knowledge of the health implications of intestinal worms or that the government offered free deworming. After learning about NDD through the program’s community mobilization efforts, she recognized its importance for her daughters’ short and long term well-being, and brought them for treatment. She continued to spread the news about the program to other mothers at the kiln who could have their own children treated on mop-up day, which happens a few days after the NDD to capture those missed. 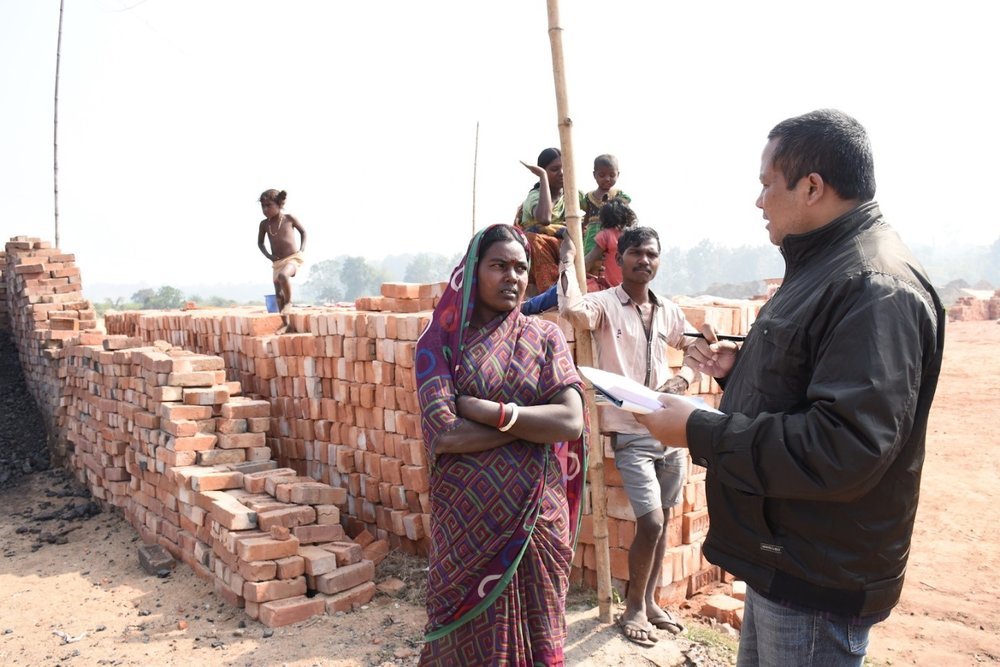 Rohit, a 12 year old child laborer at a brick kiln in Tripura, is one of many children without an opportunity to participate in formalized education. Belonging to a family of migrant laborers from Bihar state, his parents regularly shift between states in search of employment. Rohit received his first deworming tablets at the kiln during NDD in January 2018. He initially hesitated to take the tablets, but soon realized they tasted like candy, and could also keep him healthier. He plans to take the tablets again in the next round of NDD; meanwhile, he has been discussing with all his friends at the kiln about taking the tablets to live healthier lives. 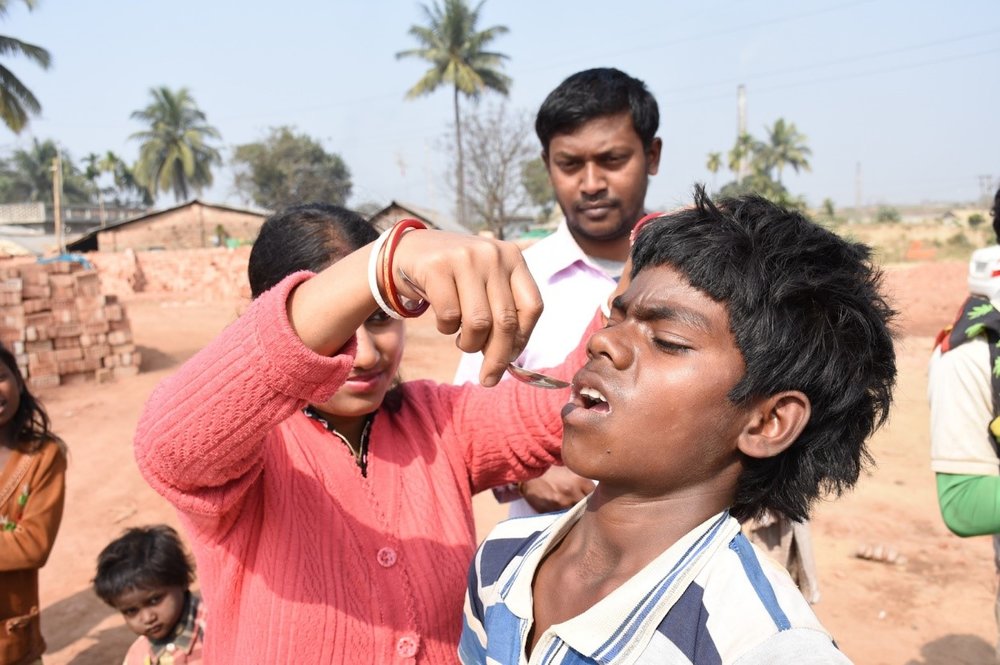 Most of the deworming programs that Evidence Action supports face some degree of challenge in reaching out-of-school or other hard-to-reach children. While some countries or states devise strategies to reach island communities or pastoralist groups, in Tripura, health worker teams must identify the migrant communities, such as tea plantation workers, laborers, and brick kiln workers among others, who move across state boundaries every 4-5 months, and encourage these populations to come for deworming. On top of logistical difficulties in doing this, migrant workers are often selective about the health services they seek and may be harder to mobilize. Despite these challenges, Tripura’s engagement with these populations has expanded access to deworming for many who had never before benefited. Furthering their efforts with hard-to-reach populations, in two regions of northern Tripura, the state is working with local volunteer teachers this NDD round to treat over 3,000 children from the displaced Reang community, who attend non-formal education.

The state government of Tripura has played a crucial role in facilitating different activities to reach migrant populations. We at Evidence Action are committed to working with governments to further develop these strategies that enable their deworming programs to reach out-of-school children, like Guddi’s daughters, Rohit, and many others. This is one practical way that we apply our values of iteration and challenging convention, to search for solutions that allow more at-risk children to receive deworming benefits in the future.