The Deworm the World Initiative works in close partnership with governments around the world to eliminate the public health threat of worms by supporting the scale-up of school-based mass deworming programs. In 2017, we maintained outstanding program reach. GiveWell named the Deworm the World Initiative a top-rated charity for the fifth year in a row, stating that it is recommended as “a program with a strong track record and excellent cost-effectiveness.”

This year, we supported governments to target over 275 million children for deworming across India, Kenya, Ethiopia, Vietnam, and Nigeria, a significant contribution towards achieving the World Health Organization’s (WHO) global goal of treating 75% of the 836 million children considered at-risk. 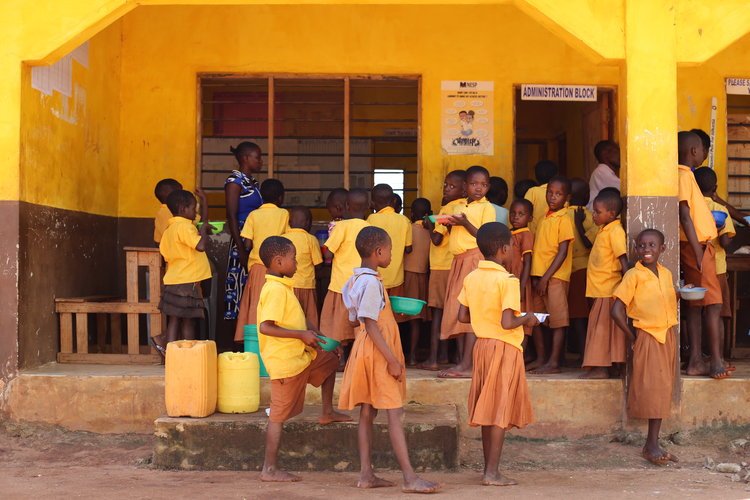 We helped further scale India’s National Deworming Day, and now support nine states with technical assistance. We expanded our technical assistance to three new states in Nigeria; in Pakistan, we employed the results of our national worm prevalence survey to lay the foundation for future advocacy with the government for school-based deworming in at-risk areas; and in Kenya we signed a new partnership agreement with the government to ensure that at-risk children continue to receive deworming treatment through schools.

In Ethiopia, we work with the Schistosomiasis Control Initiative (SCI) to provide technical assistance to the government’s Schistosomiasis and STH Control Program. 2017 marked the third round of national deworming within the five-year program, treating approximately 14.9 million children for STH and over 4 million for schistosomiasis.

In India, with our support of National Deworming Day, the government reported treatment of 260 million children in February 2017 across 34 of its 36 states, followed by 198 million children across 26 high-prevalence states in the August round. The program continues to expand its reach, including by strategically engaging private schools – given the high level of private school enrollment across many states. We continued providing on-the-ground customized assistance in nine states, including Karnataka as of July. We look forward to pursuing further partnerships in 2018 with additional states that could benefit from technical support.

In Kenya, we have provided technical assistance and fiscal management support to the government’s national school-based deworming activities since 2012. For the fifth year in a row, the program surpassed the government’s targets, treating over 6 million children for STH and over 500,000 children for schistosomiasis in 2017. After five successful years of collaboration, we are pleased to have signed a new partnership agreement with the Government of Kenya, signaling our mutual commitment to ensuring continued deworming treatment through 2022.

In Nigeria, we provide technical assistance to four states while working with the federal government’s health and education leaders to strengthen and coordinate its national deworming strategy. Three of our state-level partnerships kicked off in 2017: Rivers, Oyo, and Ogun. In Cross River state, where we began working in 2016, we partner with RTI International to support the school-based treatment component of its comprehensive neglected tropical disease program. In 2017, the program targeted over 660,000 children to receive deworming treatment in Cross River schools*.

In Pakistan, we collaborated with partners to support a nationwide survey on STH prevalence and intensity in the second half of 2016. The survey results revealed that approximately 17 million school-age children across 40 districts require treatment. In 2017, we began planning an engagement strategy for outreach to the Government of Pakistan, and we are now poised to embark on advocacy efforts with relevant stakeholders to initiate a school-based deworming program in at-risk areas.

In Vietnam, we partnered with Thrive Networks and the Government of Vietnam to conduct the third round of school-based deworming. In November, over 700,000 primary school children across 3,000 schools in four provinces in northern Vietnam were targeted. Also in 2017, Thrive Networks and Evidence Action partnered with researchers from three academic institutions –  Australian National University, QIMR Berghofer Medical Research Institute, and University of Queensland – to begin a large-scale randomized controlled trial (RCT) to understand whether improving hygiene knowledge among children leads to reductions in STH reinfection. Findings from the RCT are expected in early 2019.

Through targeted, evidence-based advocacy and high-quality technical assistance, the Deworm the World Initiative plays a major role in closing the global treatment gap for children in need of deworming. Over the last four years, the Deworm the World Initiative has increased its reach significantly, from treating 35 million children in 2014 to targeting over 275 million in 2017. We are passionate about working with our government partners and other key stakeholders to eliminate worms as a public health problem. We are extremely proud of our accomplishments in 2017 and are excited to move forward into 2018 with an agenda that continues to focus on driving high-quality coverage for hundreds of millions of children globally!